I wanted to write this text for many months. It’s been almost a year since Belarusian regime captured and tortured anarchist activists Evgeny Rubashko. We know each other many years, and I feel that it is somehow my responsibility to tell at least some parts of his story, so the world know what an amazing person he is. He is not the only close comrade siting in prison in Belarus right now, and I hope in coming weeks I will find time and energy to write more about the anarchists of Belarus who dared to stand up against the dictatorship despite all the risks.

As many activists from 00s, we both came to anarchism through punk hardcore scene. However, we got to know each other not through hardcore but anarchist activism. Somewhere around 2011 he joined cooking Food Not Bombs in our groups and through many cooking sessions we did become good friends even though he was not a great cook at the beginning…

How did it work? Every 3-4 weeks we would pick two huge pots, one for soup|porridge and one for tea, and cook for around 30-40 people who would come in the center of Minsk. There were more groups cooking, so the food within Food Not Bombs initiative was spread on weekly basis three times a week to those in need in different parts of the capital. I’m writing “was” because in 2021 initiative decided to stop working: with almost no activists left in Belarus and more pressure from the police it became very hard to keep going.

After cooking, you would have 3-4 people carrying this incredibly heavy pots through the city. Even now, writing about it makes my hands start shouting at me “never again”. You take public transport, as the kitchens are normally far from the place of the food distribution. We would buy the food for our own money even in the times when we had some financial troubles ourselves. And E. was among those dozens of activists who would do this kind of activism for years. No glory in it, just solidarity with those who are in need. It is hard to remember how many people went through Food Not Bombs help, some of them died, but others managed to dig their way out of absolute poverty. 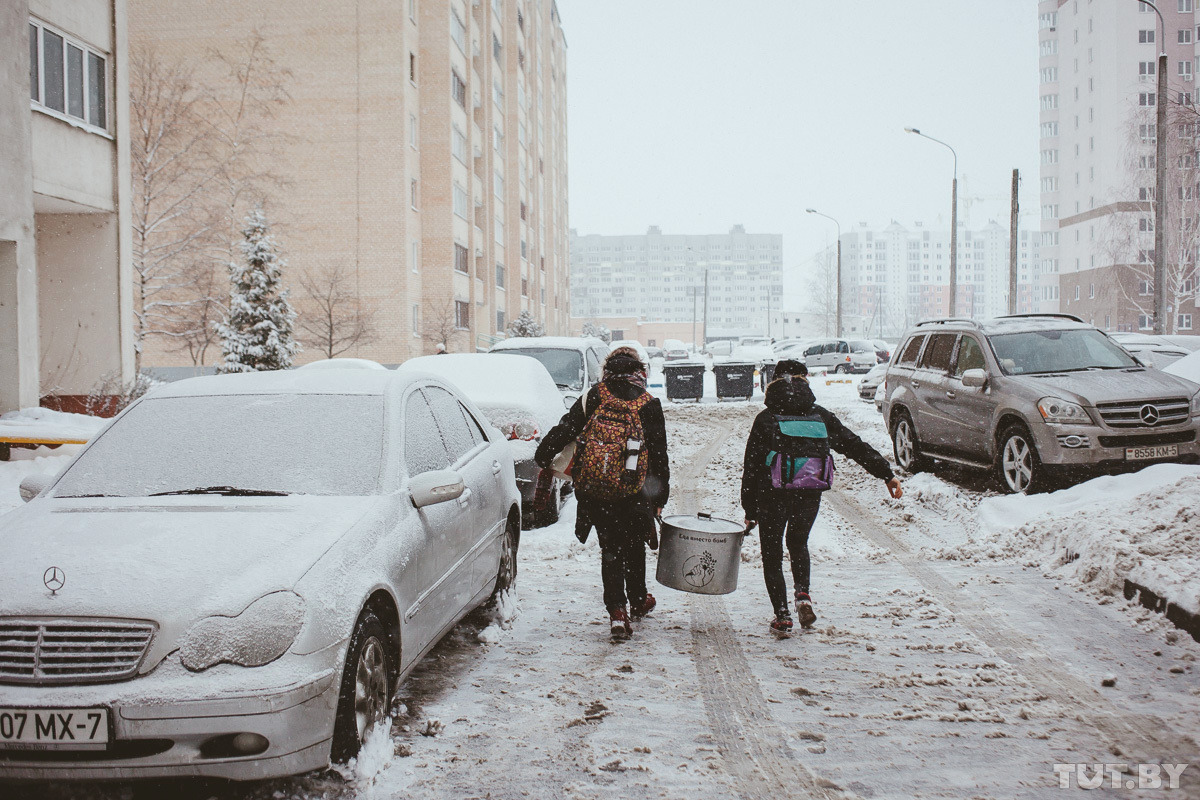 Cooking Food Not Bombs back in the days was also a political discussion club of its own. There were some really heated debates on capitalism, anarchism, private and public property and hundreds of other topics. Naturally, there were a lot of fights about politics that would always end when we start carrying the bloody pots. Physical suffering was a reuniting factor in this work.

But what really created a bond of comradery with E. for me was an accident that happened in 2012 during one of the hardcore concerts in Minsk. Both of us with some hundreds of other punks were arrested by the cops. During arrest there was a small hustle with the cops and I got beaten up (but could still walk :)). When we arrived to the police station, the violence continued. I’m not going to describe everything that happened that night to us, but at some point we are standing in the corridor, maybe 20-30 people. Some waiting for the fingerprints procedure and others for the pigs to take our statements. In this setup, cops are very unhappy with me for denying giving the fingerprints. So one of the riot cops comes to me (I’m already standing on my knees) and starts beating me from behind, standing on my legs and smashing my head against the wall. I kind of protest this, but it is a bit hard. And what is playing in my head the first 15-20 second of this beating is that nobody is protesting or trying to do something. I did have a slight fear that I’m going to die on this spot to be honest, but then Genia started protesting – he is just standing next to me, and he is the only person that dares to start shouting at the pig. This finally gets attention away from me and back to him. All the other friends I knew from punk movement were just standing faces to the wall and not doing anything.

The violent pig goes away, but they also take away Genia to another room. He came back quite fast and was surprised – the pig told him to stay calm, but they didn’t beat him or did anything to him.

This situation created a bond for me that lasts till today. I know that I can count on him in these kind of situations. And even though I went to the hospital that night, and he went to pre-trial prison, I found one of the close comrade that I’m still proud to know.

Since then, we went through a lot of ups and downs in our lives. I left Belarus, and he stayed longer but in 2019 decided to leave as well to go to the Netherlands. The reason at that point was not really political pressure, rather he was trying to help a comrade who couldn’t get a good medical treatment in Belarus. With his engineering degree, it was easy for him to move to EU. A bit more than a year after that, he decided to come back to Belarus. One of the reasons was for sure the rising tide of Belarusian protest movement, but the other side of the story was that Genia never managed to get close to the anarchist movement in the Netherlands. Political cultures in Belarus and Netherlands are very different, as well as the reasons people find themselves politically involved. Many activists from Eastern Europe struggle to adapt to the western anarchist movement.

Coming to Belarus in September 2020 he just jumped into the fight against the regime, doing everything possible to contribute to the struggle. When we met in Minsk in Autumn the same year, he was hopeful and excited that the things are going good. We all had this weird thing in the head, all believing that the change is coming. Just a small push and we are done here. Some people call it hope.

Despite all the violence and atrocities against anarchists, he stayed in the movement and showed a lot of comrades an example of courage and dedication. He was several times arrested during the protests. The last time for participation in defending the square of Roman Bondorenko, standing his ground even when there were just several dozen people left at the square, deciding to stay till the end.

We met last time in summer 2021 just a couple of weeks before his arrest. At that point, he came for some time out of Belarus, but was planning to go back to the country. The resistance was not active anymore, but there was a hope that the new fire will start.

Reading the stories of comrades being tortured provokes in me mostly anger. The situation with Genia was no different. He was tortured, and I was fucking shaking reading those details. But at the same time, I knew that he gave hell to those pigs. He was always a bold chap who could point the pig at their place. I’m pretty sure for his boldness he is still getting in trouble in the prison right now, but this kind of boldness is something that makes this world change.

Right now I’m isolated from him, taking in account that there is no mail communication with the prisoners. Writing him is like writing in one direction without knowing if he ever will be able to get the message.

With all that said, I am proud that I met this person on my own anarchist road. He is fucking amazing and I really hope that many will get to know him in the nearest future, when the prison of belarusian regime will fall.

Hey, btw, don’t forget to donate to ABC-Belarus. The group is supporting anarchist and antifascist prisoners. They are in need of 25 000 euro, so drop them some coins at https://firefund.net/abcbelarus

Written by an anarchist from Eastern Europe, Integration Nightmare is a blog about an activist living in the west and doing it’s best not to get integrated into liberal society. Most texts are in English, some in Russia, and couple in German.